The SHFD method is an advanced kind of the Kirlian-technique. With a high frequency device the peculiar discharge is investigated which is delineated on a special foil  on which a finger of the healer is exposed to a high frequency electrical field.

SFHD photographs show three typical patterns of the aura (from left to right): the aureole, the halo and the spots. More then 500 healers have been measured, and the Bulgarian physicist Dr. Ignatov found out that aureoles prevail with true healers. 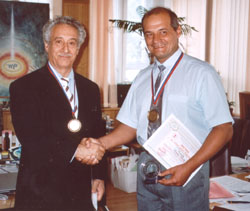 What is the name of the investigation method?
This method deals with the accomplished Kirlian effect. It is called “High Frequency Electric Discharge” (HFED).

Who has developed it?
The HFED-method was developed by Prof. Anton Antonov with a transparent dispersive electrode in 1984.

On which theory is this method based?
HFED is based on the  investigation of the human bio-electrical aura. This method was developed by Kirlian in 1949.

What is being measured?
The black and white Kirlian photograph measures the bio-electrical aura in millimetres. The results are classified as good, very good, excellent and phenomenal.
Not only a quantitative but also a qualitative characteristic is recorded. The best auras are the aureoles, then the mixed aura and the halo. The auras with “tears” are of minor quality.

How is the measuring done?
The work with the black and white and with the Kirlian colour photograph is identical. The thumb of a person is placed for 5 seconds on an electrode. A film is placed between the electrode and the thumb. The measuring happens in a DARK ROOM: The Kirlian aura is also visible for the participant of the experiment.

How ends the investigation?
The photographs of the black and white Kirlian auras are developed during the experiment. So the participants get a first impression immediately. The detailed analysis is done in Sofia. In a summary the measured results of the Kirlian photographs are then compared to the spectral analysis of water. This enables a more sophisticated statement concerning the energy radiation and the influence of the tested person.

What can be said after the measuring?
The measuring enables a glance on the nature of the participant’s aura. The analysis regarding quantity and quality enables conclusions of the prospective healer’s energy radiation and the stability hereof.
Besides the determination of the tested person’s strong points, deficiencies in certain ranges of the irradiation can be shown. Hereby it gets distinct to what extent and whereby the tested person should protect himself especially.

How relevant are the measurements regarding the cure generally?
The aura of a human reflects especially his state of energy. A stable state of energy can be seen in the peculiarity and the colour of the aura. Energy deficits and diseases influence as well the form as the coloured description of the aura. At the same time the aura of a human reflects quasi his protective shield against various sickening influences from outside.

The measuring of the aura shows not only the currant energetical situation of the tested person, it indicates also beginning deficits. Measurements with patients before or after an energetical treatment show a significant increase of their aura. The visible consistency of the aura is in close connection with the energy and healing process.

What can be said regarding the abilities of the tested healer?
The measuring indicates special abilities of the prospective healer, shows increased chances of success with certain diseases and where and if the self-protection of the healer could be more activated.

General hints
Only nature (God) decides the extent of the bio-informational abilities of each person. We can only develop these abilities further with the help of different alternative methods. The bio-impact of a person was analysed by representatives of different alternative healing methods. Among them were Bulgarian bio-therapists, people with bio-informative abilities who were trained with the method of Drossinakis’ and Reiki-masters.

It is remarkable that the representatives of all methods showed dependably a significant increase of their bio-electrical aura. Only people with extraordinary abilities can do this. This proves that there is a process of charging with energy, or rather an alignment of Yin and Yang in the body of a biosensitive person. There is also a coherence with the results of the spectral analysis of water in the “Give-and-Take-Modus” and the extent of the restoration of the Kirlian aura. This cannot be simply explained through the restoration of the own energy. The harmony with the mundane-cosmical charisma is obvious. Already in 1988 Prof. Antonov proved an increase of the aura after bio-manipulation with the biotherapist Stela Dimitrova. Since 1988 also the team with Dr. Ignatov, Prof. Antonov and Dipl.-Ing. Galabova explore parallel to the spectral analysis of water the shift of the bioelectrical aura in the “Give-and-Take-Modus” of the user of the bioinformative abilities and of the influenced person.

The question to what extent a person can influence another one and give him an energetical code remains without answer. Continuous research is necessary to assess, to what extent changes of bioinformative abilities are enduring.

For the second part of the education of IAWG we offer in cooperation with the SCRMB of Dr. Ignatov the following tests:

Especially good results will be published by Dr. Ignatov in the next edition of his book “Energy Biomedicine”.