Prof. Dr. S.V. Zenin, Russia (the foto shows him together with Christos Drossinakis on the occasion of a visit in the Russian ministry for health, Moscow) 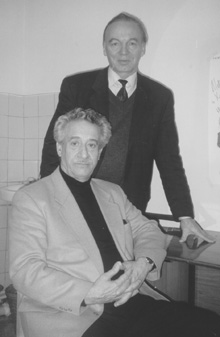 What is the name of the investigation method?
It is the differential-conductive method for the determination of structural changes of water.

Who has developed it?
This method has been developed in the laboratory of the federal centre of the Russian ministry for health (2001, Prof. S.V. Zenin).

On which theory is the method based?
This method bases on the theory of the structure of water released during the 2nd international congress “weak and superweak interactions in Biology and Medicine” (Moscow 1999) and in the Russian “Journal of Physical Chemistry” (1999, Prof. S. V. Zenin).

What is being measured?
The difference of the electrical charge of distilled water of a scrutiny and an experiment sample. The experiment sample is analysed after a manipulation of the user.

How is the measuring done?
A special construction which had been certified in Russia is used. The experiment sample is located in the machine during the measuring, the interference is done mentally.

How is the evaluation of the test?
The test is evaluated by means of 2 parameters: The difference of the electrical charge in distilled water in the scruting- and the experiment sample and the kinetics of the changed charge after the interference.

What can be said after the measuring?
After the measuring a statement can be made concerning the success and the intensity of the interference.
Due to the kinetic of the change of the electrical charge after the procedure it is possible to assess the specifical peculiarity (for example the extent of the harmonization).

How important are the measurements concerning healing generally?
The importance of such measurements for the healing is elemental:
a) The existence of bioenergy for the alteration of the structure of water is the proof of the bioenergetical abilities of the tested person, the most important element in the activity of a healer. It excludes placebo impacts and mere psycho-therapy.
b) The specifical characteristic of the bioenergetical action helps to determine exactly the diseases to be treated by the healer.

Which statements can be made concerning the abilities of the tested healer?
a) A healer can only carry out his job when he disposes of appropriate bioenergetical abilities.
b) The analysis of the specifical characteristic of the bioenergetical action makes it possible to recommend the healer for the treatment of certain diseases.