At conventions, in scientifical institutes and research laboraties, sometimes also among the patients in his consulting room, Christos Drossinakis met during decades many outstanding scientists from various countries. All of them expressed their positive impression after they came to know him well as healer and test person and tried him either in studies or self-attempts. Several of these personalities belong to the scientifical advisory board of IAWG. They help Christos Drossinakis to attain his ambitious aim to give the education of healers finally a scientifical basis. 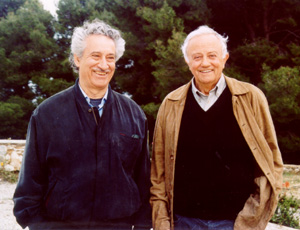 We are friends for many years. Both of us are interested in homeopathy and mental healing. Our exchange of informations is very important for the understanding of these two sciences.
Georgos Vithoulkas is a greek homeopathist. Vithoulkas, who received the "Right Livelihood Award" in 1996 in one of the best known homeopathists of the 20th century.

The famous mental healer Christos Drossinakis has scientifically proved abilities for human beings and other living systems. His cooperation in scientifical researches is very important for our efforts to reveal the secrets of nature

Drossinakis' phenomenal abilities make him an inexhaustible source of data for us researchers.

Director of the scientifical research centre for medical biophysics (SRCMB)

Christos Drossinakis is brilliant, simply a phenomenon. His outstanding talent is probably given by God. Doubtlessly he is the most capable healer in Europe. He plays an important roll in the history of the western alternative medicine. More than 600 healers from more than 30 countries took part in biophysical tests. 58 of them achieved very good results, 23 were excellent. But only Christos Drossinakis managed to produce a bioresonance interaction. This effect is decisive for the therapy.

The work of Christos Drossinakis helps to combine the different methods of healing and researching. His work can contribute to the recognition of mental healing within the scientifical and medical research.

After I learned about the astonishing biophysical studies with Christos Drossinakis I invited him to my institute in autumn 2001. I met a charismatic personality with a strong impulse to research. I would like some of my colleagues to be alike. It is not possible to be a truly serious scientist without being challenged by these phenomenons accomplished under supervised laboratory conditions. He is irreplaceable for the further biophysical research.

President of the Russian health organization. Director of a clinic for neurosispatients, Moscow

The benevolent interest of the highly talented bioenergy-therapist Christos Drossinakis enabled our team of scientists in Russia to achieve unique results with numerous scientifical experiments. The reality of the phenomenon of micro psycho-kinetics. By means of this unique talent he is able to influence bio-physical structures in physical and psychical scopes energetically.
My university colleagues and myself sincerely wish a further cooperation

In autumn 2002 we made 3 tests. Christos Drossinakis tried to influence our trials by telepathy– water analysis, blood serum and worms – in the Russian ministry for health in our institute in Moscow. All three tests showed that a mental tele influence really exists. Such abilities should be investigated in any case also in the national Lomonossow university

Physicist and psychologist, developed a new method for measuring waves in the brain (EEG). With this help he found that mental healing and other psi-phenomenons have accompanying frequencies. So supersensual things are measurable for the first time.

Outstanding abilities
The influence of mental healing by Christos Drossinakis had been recorded reliably with the GDV-camera. This shows distinctly that Drossinakis has the ability to influence the human energy field positively. The result of the experiments which were attended by a big group of internationally recognized professors and scientists, showed the outstanding abilities of the healer Drossinakis to influence the state of energy of human beings, animals and water.
The experiments have been repeated several times. On behalf of science I am interested to continue the biophysical experiments with Christos Drossinakis.