The so called DNES treatment of the Bulgarian physicist Professor Dr. Anton S. Antonov from the technical university Blagoevgrad and Dr. Ignat Ignatov, director of the scientific research centre of medical biophysics (SRCMB) in Sofia includes physical-chemical tests of water which has been influenced by mental healing. 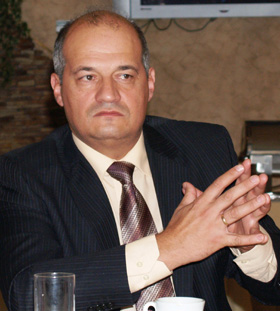 Who has developed it?
The DNES-method was developed by Prof. Dr. Anton Antonov in 1983. Dr. Ignat Ignatov works with the aid of biophysical field research to develop this method further.

On which theory is the method based?
DNES is based on the quantum-mechanical performance of the hydrogen bond in the water.

What is being measured?
The DNES-method records the affectation of water in the “Give-and-Take-modus” for the first time in the world. (Hereby energy is eather added or withdrawn). The average energy of the hydrogen bonds is measured in micro-electron volt. The result in the give-modus is negative, the result in the take-modus positive.
The deviation between the “give-“ and the “take”-modus is being defined as effective energy. When the deviation shows negative data, the concerning person has bio-informational abilities. The results are classified as “good”, “very good”, “excellent” or “phenomenal”.

How is the measuring done?
A certain person influences in the “give-modus” in a time period of 20 minutes a bottle with 120 ml deionised water.
Important elements are the power of his energy and the energy flow from him to the bottle. In the “take-modus” the work is done vice-versa. A third bottle serves as control trial for the measurements of the change in both influenced bottles.

How or wherewith the test is terminated?
The Water samples are examined in the laboratory in Sofia and considering the  changes compared to the test sample.

Which statement can be made after the measuring?
By means of the measured changes in the structure of the treated water it is possible to evaluate the passing of energy of the proband. It gets clear to what extent the proband in capable to activate his energy and pass it to the water or to withdraw it. The ability to pass or withdraw energy deliberately is a basic requirement for an activity as healer.

How relevant are measures concerning healing generally?
Considering that the human body consist of 80% water and diseases are caused mostly by energy deficit, the changes of the energetical state plays a central roll with healing. The measurements show to what extent activated energies can cause direct changes in water samples.
On the occasion of the awarding of the “Swiss Prize” 2003 Prof. Alex Schneider utters his opinion concerning this: The scientifical tests of the Bulgarian teams prove not only the proficiency of the healer, but also the expected medical impact on the patient.

What can be said concerning the abilities of the tested healer?
The measurements clarify the abilities of the prospective healers concerning the  conscious activating and passing or withdrawal of energy. Since this test includes the manipulation without direct contact with the tested sample, it shows to what extent the person is able to pass energy. If this passing is successful with significant results, the probands may partake in a tele-experiment to pass energy over a large distance.

General hints
Only nature (God) decides the extent of the bio-informational abilities of each person. We can only develop these abilities further with the help of different alternative methods. The bio-impact of a man was analysed by representatives of different alternative healing methods.
Among them were Bulgarian bio-therapists, people with bio-informative abilities who were trained with the method of Drossinakis’ and Reiki-masters.

It is remarkable that the representatives of all methods showed dependably a significant increase of their bio-electrical aura. Only people with extraordinary abilities can do this. This proves that there is a process of charging with energy, or rather an alignment of Yin and Yang in the body of a biosensitive person. There is also a coherence with the results of the spectral analysis of water in the “Give-and-Take-Modus” and the extent of the restoration of the Kirlian aura.
This cannot be simply explained through the restoration of the own energy. The harmony with the mundane-cosmical charisma is obvious. Already 1988 Prof. Antonov proved an increase of the aura after bio-manipulation with the biotherapist Stela Dimitrova. Since 1988 also the team with Dr. Ignatov, Prof. Antonov and Dipl.-Ing. Galabova explore parallel to the spectral analysis of water the shift of the bioelectrical aura in the “Give-and-Take-Modus” of the user of the bioinformative abilities and of the influenced person.
The question to what extent a person can influence another one and give him an energetical code remains without answer. Continuous research is necessary to assess, to what extent changes of bioinformative abilities are enduring.

The tests of SCRMB
For the first part of the education of IAWG we offer in cooperation with the SCRMB of Dr. Ignatov the following tests:

For the second part of the education of IAWG we offer in cooperation with the SCRMB of Dr. Ignatov the following tests:

Especially good results will be published by Dr. Ignatov in the next edition of his book “Energy Biomedicine”.